The 43 Years Journey Of Surat Raktadan Kendra And Research & Centre

Blood Bank Scenario in the year 1976

Before 43 years any patient in Surat who needed blood had to go to a commercial blood bank. Commercial blood banks took full advantage of this situation and exploited the situation by selling substandard blood collected from poor and diseased professional donor. It was supplied to the needy patient at a variable price depending upon the urgency and availability. The efforts to encourage voluntary blood donations were very few and sporadic. There was no voluntary service organization that could take over this important and critical aspect of healthcare service on a permanent basis in Surat district.

In such a scenario around 1974-75 the idea to establish a voluntary blood bank was mooted by Dr.Pradip K. Desai who was the first qualified pathologist to start his professional service in this area. He was joined in this effort by his friend Dr. Vinod H. Shah ENT Surgeon and Dr.Nikunjlata Tijoriwala, a leading gynaecologist. With the help, inspiration and encouragement from their friends Late Shri Sardar Vazirsing and the then Municipal Commissioner, Shri K. Ramamoorthy.

This noble idea received overwhelming support from every walks of life. As a result very soon likeminded started working in the direction of establishing a Voluntary Blood Bank. The aim was to provide highest quality human blood collected from healthy, disease free, voluntary blood donors with minimum service charge.

The constitution was drafted by Shri Ramamoorthy and Shri I. J. Desai with the primary objective to encourage, motivate and support voluntary blood donation and to run an ultramodern blood bank on "not for profit" basis. Their efforts resulted in to registration of charitable trust with the name “ SURAT RAKTADAN KENDRA on 1st October 1976. The humble beginning with high aims and objective started in Surat General Hospital with support from Late Shri Kanaiyalal Modi.

There was tremendous supports from doctors and patients to this new ventures resulting in to shortage of space. The Surat Municipal Corporation recognised the social service rendered by the centre and allotted stand alone premises in Gopipura. We shifted entire operation to new premises at Gopipura on 27th February 1994. The centre was being nurtured with personal time devoted by trustees on day to day basis.

It was a major turning point in the history of our institute when Dr.Snehlata Gupte joined our institution as Director. She made tireless efforts with dedicated zeal and created research wing on 1st October 1999. The research work exhibited under her academic excellence received approval by Department of Scientific Research (DSIR), Ministry of Science and Technology, Govt. of India. Our centre received National platform and recognised as leading blood bank of India.

We published a book in the year 2000 written by Dr.Snehalata Gupte titled “Recent Trend in Transfusion Medicine”

The motto of management was to adopt state of art technology whenever it is required for the benefit of patients. Our institute established “Aphaeresis facility” equipped with additional infrastructure in the year 2002.

Surat District is surrounded by tribal areas where supply of blood was an acute problem. We mooted an idea of creating storage centres at strategic locations to enable under privileged population to receive blood and save precious lives. Our institute received approval on 8th March 2004 as Regional Blood Transfusion Centre by Gujarat State Blood Transfusion Council. This has added one more feather in the cap as it gave opportunity to serve many interior parts of Surat District where timely availability of blood was a problem due to absence of full-fledged blood.

The image of centre was built on transparency, commitment and integrity. This is visible when Surat Municipal Corporation allotted bigger premises at Khatodara with 17000 sq. feet area in 2008. We build ultra modern blood bank with state of art equipment due to generous donation received from respected Mr.Arvind Tejani and Mr.Jasmatbhai Vidya. We opened a wing on name of beloved mother “Smt. Shantaben Nanubhai Vidya blood bank.The centre was inaugurated by Respected then Chief Minister of Gujarat Shri Narendra Modi and blessed the centre for further growth.

It was our founder’s vision and commitment to provide safe blood at affordable cost. To achieve these dual objectives we took bold step to provide NAT (Nucleic Amplification Test) tested blood to all recipients. This test is done in developed countries but in India it is not mandatory. We were the first blood bank in Gujarat to provide NAT tested blood without increasing cost to patients and absorbed financial loss. The Medical fraternity welcomed this initiative which was a torch bearer for other blood bank to follow the suit.

The trustees decided to manage the centre by adopting national standard practices of blood transfusion and get NABH accreditation. There were series of procedural changes introduced to entire blood banking operation. We successfully received NABH accreditation on 26th December 2010.

Dr. Jaya and Dr. Harivadan Shah from UK offered generous financial support to start Institute of Applied Science which can offer several programmes to students. We commenced a “post Graduate Diploma in Medical Laboratory Technology (PGDMLT) course affiliated to Veer Narmad South Gujarat University) from June 2016. We propose to commence PhD / DNB and other academic programme in times to come.

The journey so far is the result of impeccable commitment, dedication and integrity of Trustees, staff, voluntary blood donors and camp organisers. The team of SRKRC to reach to newer milestone and expanding activities never stops. We are in process of establishing namely, Stem cell Biology and Regenerative Medicine, Molecular Medicine Centre to embark upon newer mile stones in coming years.

Please fill in the form below

You must complete the form in order to proceed. 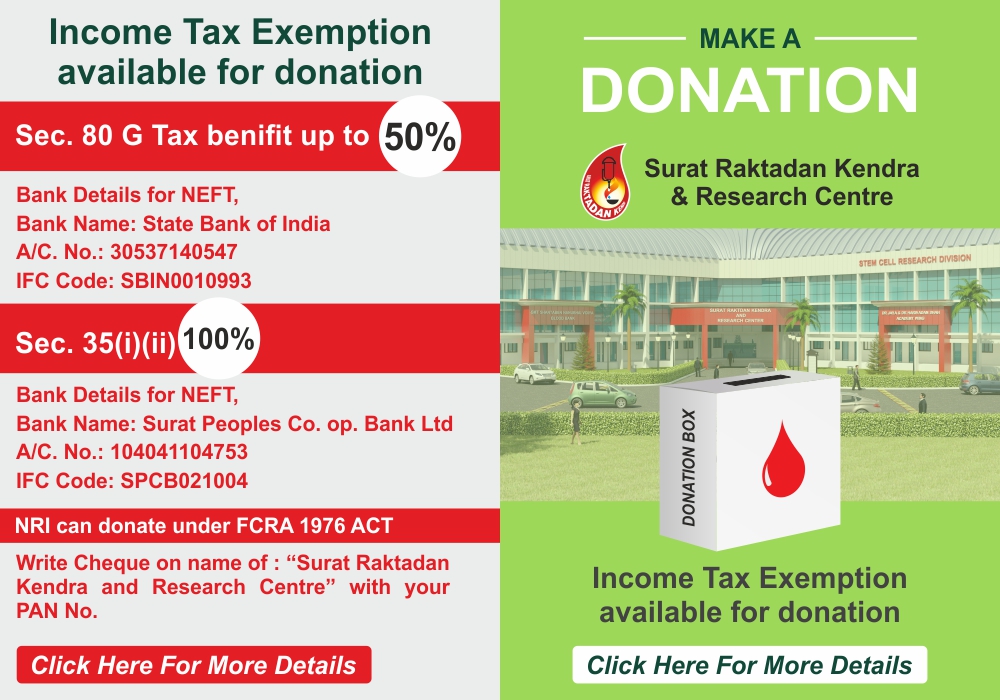